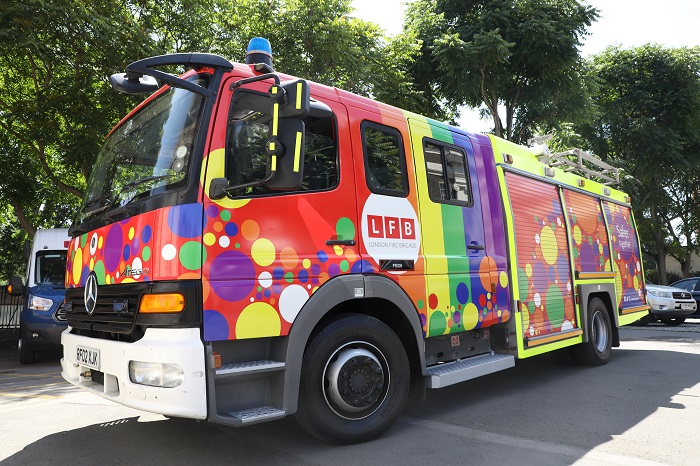 Walking through Covent Garden this morning, I saw a fire engine parked up.  Every London Fire Brigade appliance (that’s the correct term for a fire engine) has the name of its station on the side.  This one was from Soho and having recently done some filming with Blue Watch, I went up to the cab and asked which watch they were from.  “White Watch”.  “Ah, I only know Blue Watch” – at which a voice piped up from the back. “Hello. What are you doing here?”  It was “Minty” McLean, a firefighter I knew from working with LFB.  It was nice to be remembered and good to catch up with someone I had briefly worked with.  I recently left LFB at the end of some contract work.

What he said next really touched me, “Thank you for your email. That meant a lot.”

As part of an induction project I managed, I had produced a corporate induction film for LFB.  On my last day, I had emailed everyone who had been involved in the shoot – more than 100 colleagues – with a short credits film I had created to ensure everyone was thanked and recognized for their contribution, however large or small.  Minty appears in the film so I had sent him the credits.

There is a saying about work, “When joining tell the truth. When leaving lie.”

It is good advice when applying, being recruited and joining an organization, to be honest. CV falsehoods can far too easily be discovered and can jeopardize your employment.  More importantly, not disclosing a disability or a learning need or your sexuality can leave you struggling to feel psychologically safe.  Whilst employment legislation and HR practices have come on in leaps and bounds in the last decade, individuals can find difficult it to disclose important aspects of themselves.

I once coached a PA leaving another organization.  They were moving to a new role for a new company and wanted some advice on managing for the first time.  Really what they wanted was to offload about their working environment, the stress, workload and an apparent lack of recognition from their managers. I was happy to lend a non-judgemental ear.
“Should I mention this at my exit interview?”  I counselled against a rant.  You never know when you might be applying for another job there and you wouldn’t want to leave any hard feelings.

A week later I heard HR colleagues discussing the individual’s exit interview and it was easy to deduce that my advice had not been heeded. It was clear that person would not be employed again.

So, there are good reasons for the truth and, if not lies, perhaps some economy with the truth.

I would like to add a third piece of advice.

When leaving, say “Thank you”.

I have always felt grateful to my colleagues and employers. And whilst organizations will always have good people and not so good people, I have always strived to nurture a fondness for everyone, whether I like them or not.

So, saying thank you is a genuine way of acknowledging the roles, however small, they have played in your career and life.

And like Minty, people remember.  And that’s no bad thing.

You can see Minty at 45 seconds into the video – https://www.youtube.com/channel/UCXpJq5lM-8F8zz9yjFadgZQ.